What is the best way to take measurements with the Icare HOME tonometer?
1
Entering edit mode

I just got my ICare Home2 today. I just took my measurements and my left eye was 15 with both eyes open. Then I took it again and the same eye was 11 with my other eye closed.

What is the best way to take measurements, with the eye not being tested open or closed? Which is more accurate?

The most important thing you can do in my experience is to be comfortable and relaxed. Usually, your eyes and facial muscles will be most relaxed when you have both eyes open.

Closing one eye could lead to inaccuracies, in my opinion.

In my experience, we should all give ourselves sufficient time to become fully comfortable and proficient at self-tonometry with a handheld tonometer. Until then, do not take any of your IOP values too seriously.

Personally, I would ignore the IOP value of every measurement the first few days. I would pay attention to your comfort level and your technique. I would take multiple measurements every day in as many different situations as possible. Try it sitting down, standing up, inside, outside, etc. It can take weeks to become proficient with a handheld tonometer. Don't feel pressured to get accurate results right away. Instead, focus on mastering your technique.

I've been doing self-tonometry since 2006 and I have been using an iCare at home since the iCare TA01i model was first released in the USA (which I think was in 2007 or 2008). When I first started using an iCare, it took me a few months before using it was second nature. (Eventually, I became able to use my iCare while doing different yoga postures.)

The newer Icare models are significantly improved, which is good news. You can become proficient with them much more easily and quickly. But patience is important for anyone new to self-tonometry. Don't take your IOP values too seriously until after you are proficient in using the tonometer -- that could take a few weeks or longer.

During this learning period, while you are not taking the reported IOP values seriously do practice the correct measuring technique with some diligence. With an iCare, you want the probe to gently contact the area at the center of your pupil. The angle of contact should be perpendicular (90 degrees to the surface). In other words, there should not be any "off angle" between the probe and your eye.

With prior model iCare tonometers, you should ensure the probe path is horizontal to the ground. The iCare HOME 2 (and the Pro model) can take accurate measurements when the probe is at other angles, but that's not true for prior models.

It usually helps a lot to have a friend or family member watch you and give you feedback. It's even better if they can video record you taking a measurement and the video is clear enough for you to see the iCare probe and where it contacts your eye. Take additional videos as you become more comfortable with the iCare. I suspect you will see less tension in your face and an improvement in your technique as well as your comfort level over time. 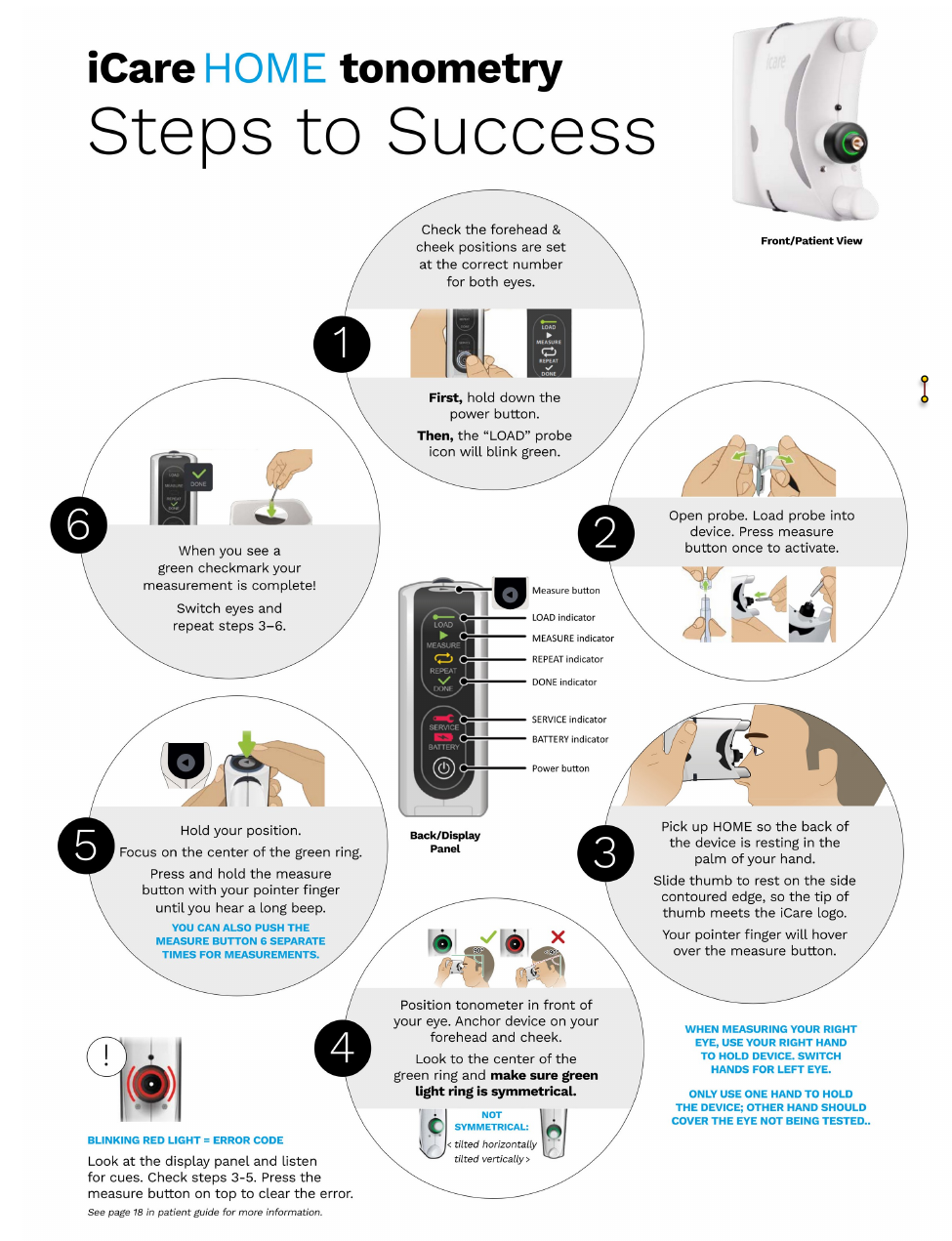