Many of us have begun using multiple monitors for our personal (and work) computers. Why is this becoming so popular? There are a number of key advantages to a multiple monitor setup. According to a study done by the Jon Peddie Research Group, productivity increases an average of 42% when using multiple displays. These setups can also reduce eye strain and make using a computer generally more enjoyable and easier. Multiple monitors can be a real boon to anyone with vision limitations.

"We found that users of multiple monitors have an average expected productivity increase of 42%," said Dr. Jon Peddie, President of Jon Peddie Research.

Here is one quote that particularly resonates with me:

However, I now believe that I may have been doing it all wrong these past 25 years! How, exactly, have I been using multiple monitors? Just like everybody else. I think we could all be doing it sub-optimally at best. At worst, I think we could be harming our visual acuity.

If you use dual monitors or you know anyone who does, the setup probably looks similar to one of these: 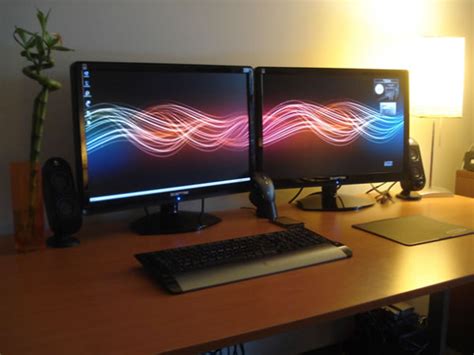 For three monitors, a typical setup looks similar to this example: 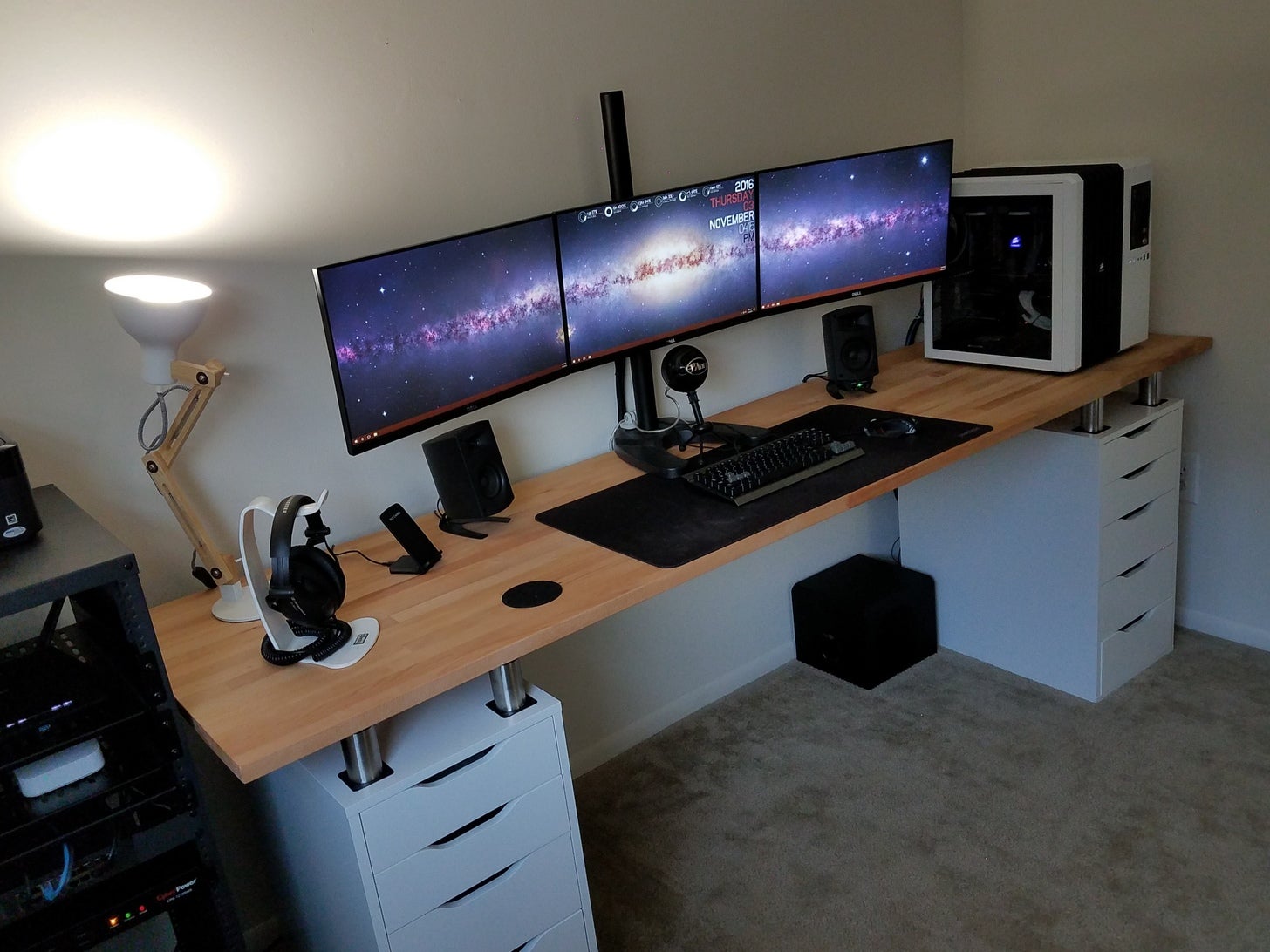 If you use a laptop with one or two external monitors, you may set it up similar to this example: 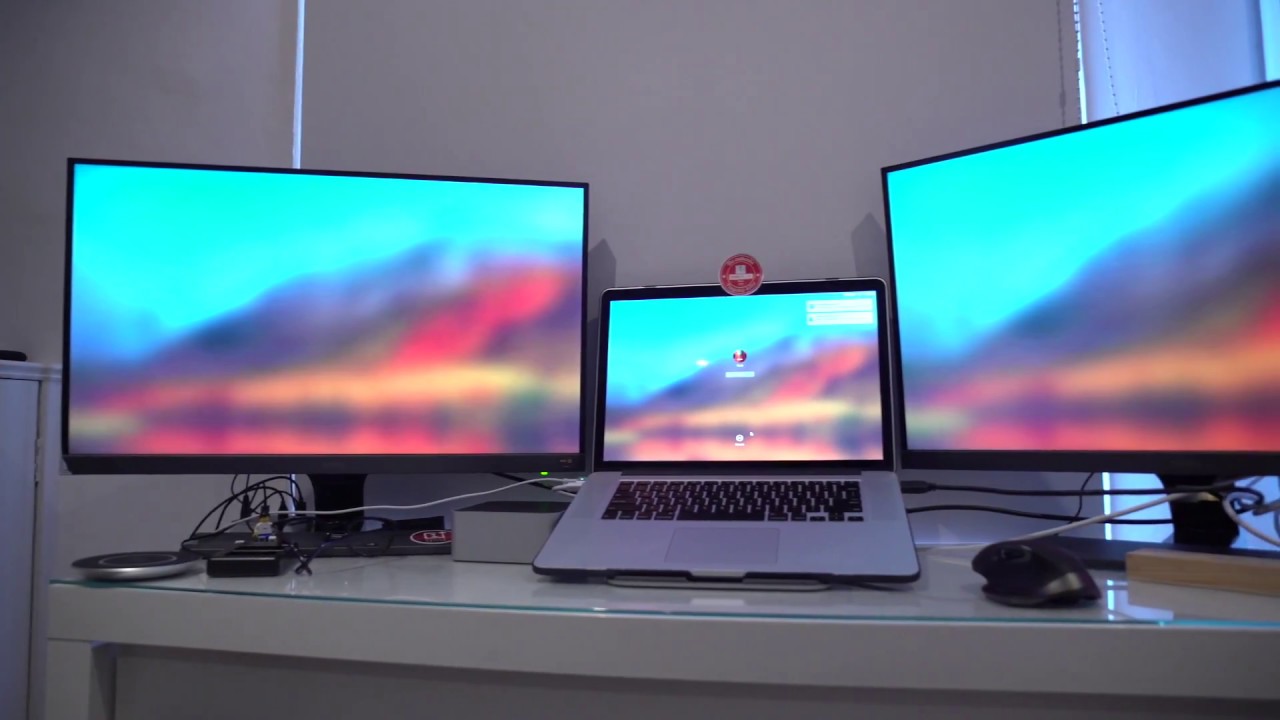 What do all these examples have in common? One important thing -- and the key point I'm discussing in this article -- is that the monitors are all at a similar focal distance from the user's eyes.

Here's an image from a tutorial showing how to set up six monitors. Notice that the monitors are all closely aligned and they tend to wrap around the user's head. 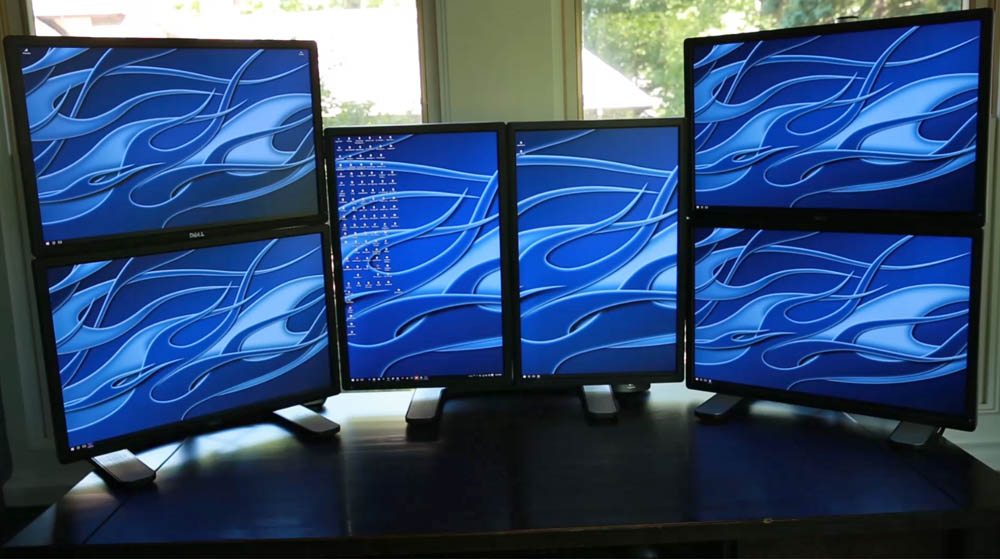 Here's an even more extreme example. Notice that whether it is one's first extra monitor or one's tenth monitor, every example and every tutorial I have seen on the Internet designs the setup to position the monitors at a similar distance from the user. 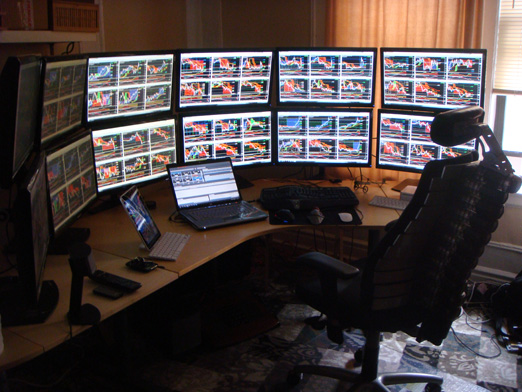 I now realize that I have been missing a huge opportunity to change my focal length and give my eyes some healthy exercise while using the computer. (Yes, I buried the lead in this story.)

Recently, I decided to radically change this approach and position my multiple monitors all at different distances. As part of this experiment I went from three monitors to four. The fourth is placed as far away as I can currently place it. I moved one of my original three closer and I moved one further away. Now I have four monitors all at different distances.

Although the picture makes the three closest monitors look similar in distance, the middle one is 13 inches further back than the left monitor and 15 inches further away than the right monitor. There is a distinct change in my visual accommodation when shifting my gaze from any of of these monitors to the other. And there is an even larger change when I look at the fourth monitor.

I have been using it for a couple weeks and I really like the change. The first day I really noticed the change in accommodation (focal distance of my eyes). I barely notice it now, but there is no doubt that this new setup helps my eyes change their focal length very frequently. No longer do I spend much time looking screens that are the same distance away. Every few minutes my eyes move from one screen to another and hence from one focal length to another because none of the screens are the same distance from my eyes.

This setup does not eliminate the need to take frequent breaks from the computer. It does not replace going outside each day and using your eyes in healthy ways (such as walking mindfully, engaging in playful activities, etc.). It also doesn't replace natural vision techniques such as the Bates Method. But it does prevent your eyes from being stuck at the same focal length the entire time you are looking at your computer screens.

As I mentioned, the first day or two, the change felt dramatic. Now it feels normal, but every time I look from one screen to the other, I know my eyes are shifting in a healthy way. It feels relaxing for my eyes. It feels healthy. I enjoy it a lot.

Personally, I am convinced that most of us who have been designing our multiple monitor setups so that our monitors are at a similar distance from our eyes have been doing it all wrong. (I understand there are exceptions -- particularly in gaming. So my target for this article is productivity workers and casual computer users, not gamers.)

If you like this idea, or are just curious to try it, just move one of your monitors closer and move one much away. Then give yourself a few days to adjust. If you like it, move one even closer and the other even further away. However, don't make the distances such that it causes any eye strain. You should be able to comfortably use all the monitors. I can read text without strain on all my monitors. (However, on the fourth monitor which is the furthest away, I usually don't do fine detail work.)

My first response - not too useful, but dead serious - is that I use my laptop with an external monitor 3-4" behind it, and it does NOT work well with the progressive lenses that I've had since before my failed cataract surgery in August 2020. (As I've mentioned in various Discuss threads, since then I've had a horrible time trying to get glasses that work.)

But I think I've just ordered glasses that are well adapted to my current eyes, and when they arrive after the holidays, I'll be back.

Here's an analogy to consider. A fitness trainer would normally instruct a new client to exercise through the full range of motion. However, if an individual has a joint injury, they should not (and maybe cannot) exercise with the full range of motion until the injury has healed. In your case, you are in the midst of dealing with the aftermath of a failed cataract surgery, so what I have suggested in this post would not be appropriate for you now, especially without supervision and guideance. But it may play a role in a vision therapy program. Discuss this idea with your vision therapist and see what they recommend.