What could cause a delayed IOP increase after hard exercise?
0
Entering edit mode

I have noticed several occasions recently where I've done a relatively hard session on the bicycle, and then some hours later (4-6) I see a significant increase in IOP.

Immediately after finishing the exercise, my IOP is quite low (for example, 14 mmHg yesterday). But then last night, 5 hours later, it was 26. This has happened a number of times.

I can't for sure say that the cause was the hard exercise session. But I have seen this a few times and it seems like there might be a connection between hard exercise and this delayed IOP increase.

Yesterday's workout included about 25 min of lactate threshold level riding. I'd not previously read about any contraindications for doing such exercise.

From Bob on the FitEyes email discussion group:

Have your glaucoma doctor look for irido-zonular contact. Anyone that has open angles and who has pressure rises after exercise may be having pigment liberation. The tell-tale sign is transillumination of the mid-periphery of the iris, increased pigment liberation after dilation and pigment deposition on the back of the cornea (called a Krukenberg Spindle: see https://healthjade.net/krukenberg-spindle/).

Transillumination defects are visible in the image below. The center area is the pupil. The orange radial lines are caused by light leaking back through the iris due to loss of pigment. 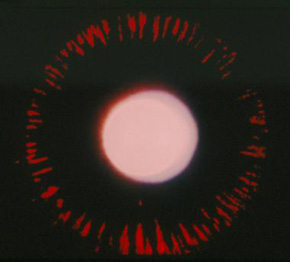 Anything that can limit that irido-zonular contact, like minimizing accommodation or "freezing" the iris, could make exercise less of a risk factor. There are several things which may work but come with their own risks. These include replacing your natural lens (which is thicker) with an artificial lens (i.e., have early cataract surgery), get a peripheral iridotomy (to avoid reverse pupillary block), using pilocarpine to pull the iris tight, and doing computer work and close up work with reading glasses (nearer focal length) so your eye's accommodation mechanism is not overly active.

One of the big mistakes I made for many years was not using multifocal corrective lenses while using a computer. I hate to imagine how much less pigment would have been liberated had I reduced all that extra accommodation.

Anyway, the article linked above is really good at explaining the phenomenon of pigmentary liberation. I counted 9 references from Dr. Ritch. I suspect that many people whose pressures rise in the hours after exercise are experiencing pigment liberation and there would be avenues to pursue to limit that. Some of those avenues would also help reduce pressure elevation after exercise in eyes with narrow angles. It is a structural thing and there are ways to probably overcome it, but doing so is not without risk, so seek out good guidance.