Visual field (VF) testing is, and always will be, a central aspect in glaucoma management. However, the modalities used to perform these tests are rapidly changing. Although VF testing consists of various methods, such as tangent screen, kinetic perimetry, and static perimetry, standard automated perimetry (SAP) is the gold standard method used for glaucoma management. The advent of new technology has given physicians the ability to offer the full suite of VF testing in instruments that no longer require an entire exam room or dedicated testing area. The purpose of this article is to shed light on the current landscape of VF testing by reviewing current and emerging virtual reality (VR) devices being used in the management of glaucoma, as well as how each compares to the current gold standard, the Humphrey field analyzer (HFA, Carl Zeiss Meditec Inc.).

Head-mounted perimeter devices that use VR offer many advantages over the current SAP devices. Comfortability is most the most obvious, as these devices have a much-improved ergonomic design, significantly reducing any space restrictions or discomfort-induced reliability issues. The portability of the devices allows them to be used in any standard exam room in a clinical setting, and some models can even be used at home by the patient. Moreover, the average cost of the VR equipment is less than that of the SAP. However, VR headsets do not come without their limitations. Because of their weight, these devices may not be the best choice for patients with head or neck injuries.

Virtual Field (VVF, Virtual Field inc.) launched its VR platform at the end of 2019. The system includes a VR headset, trial lens adapter, and clicker ([Figure 1]). The test battery includes the traditional 24-2, 10-2, 30-2, kinetic, and frequency doubling tests. The stimuli are presented to each eye independently inside the headset. Progression analysis software is included, and access to results can be obtained from any laptop or mobile device via the company’s HIPAA-compliant website. Reports can be integrated directly into any EHR, as well as can be downloaded in PDF format.[1] 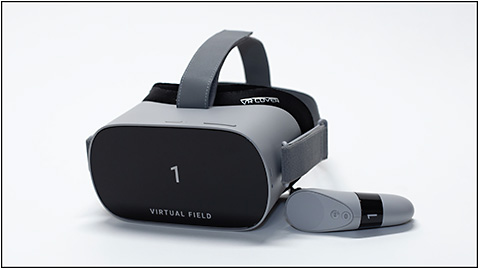 Studies have compared the VVF to the HFA ([Figure 2]). In a study consisting of 25 patients undergoing routine VF examinations for management of their glaucoma, an additional VF test was administered using a Virtual Field 5 minutes after completing the HFA 24-2 Sita Standard test. This comparative study revealed that the VVF yielded statistically fewer fixation losses as well as fewer false positives than the HFA, while also demonstrating excellent correlation with HFA in regards to mean deviation (0.85, P<.00001), pattern deviation (0.79, P<.00001), and VF index (0.93, P<.00001) ([Figure 3]).[2] 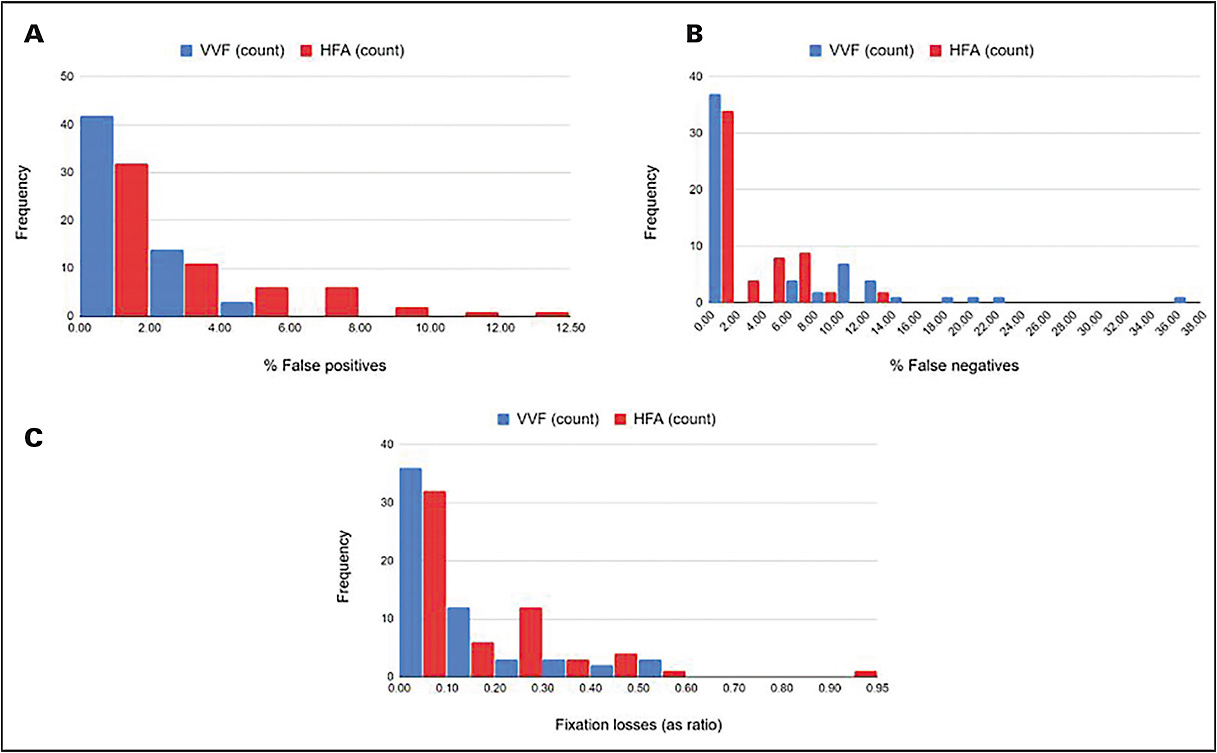 The Vivid Vision Perimeter (VVP; Vivid Vision) is a VR perimetry platform specifically designed to operate on commercially available VR headsets and mobile headsets that do not require a dedicated computer ([Figure 4]). The testing software utilizes a dynamic fixation marker that changes location from trial to trial, and patients respond by moving their heads or a hand-held pointer in the direction of the seen targets ([Figure 5]). Doing so allows for the classification of false positives on a trial-by-trial basis. This dynamic fixation target allows for a task-oriented virtual test environment that monitors eye movement by exploiting the fact that patients fixate accurately when performing high-precision tasks.[3] The perimeter’s interface is programmable and comes loaded with several tests. The default perimetry test is similar to a traditional 24-2. The software is designed to be used at the patient’s home or in clinical settings where conventional perimetry is difficult, with the average test time lasting 10 minutes per eye. Additionally, 2 other tests are included in the software platform intended for vision screening and scotoma measurement. 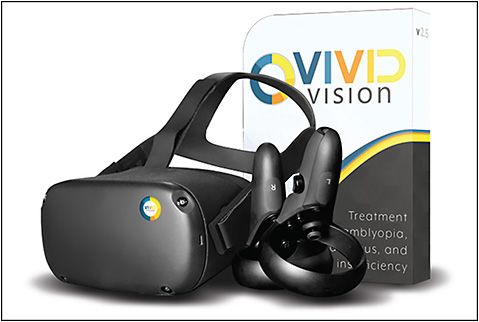 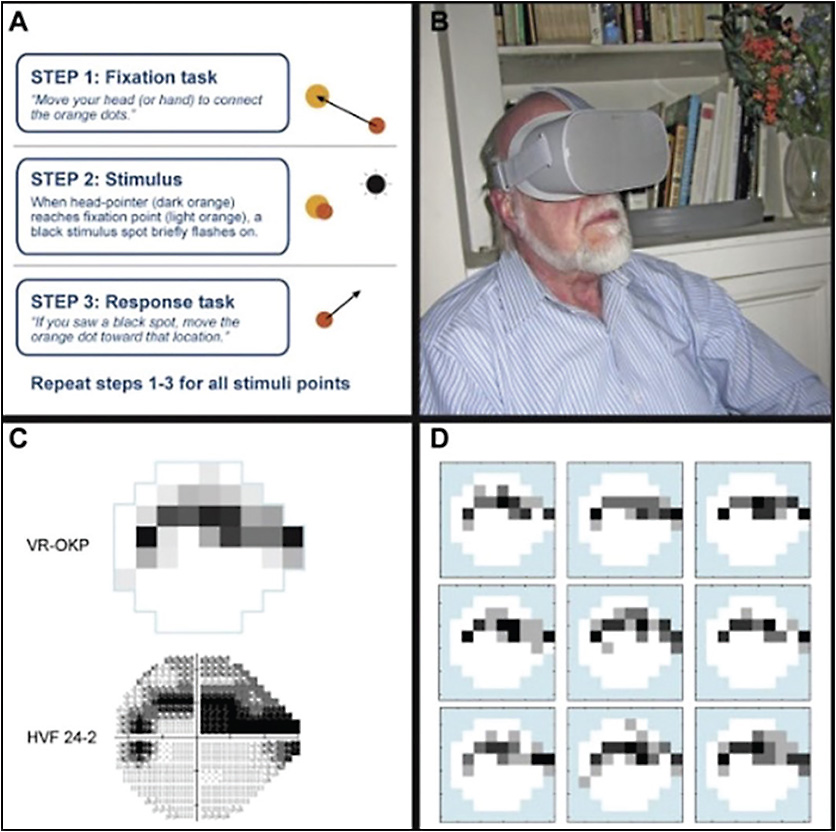 Figure 5. The Vivid Vision Perimeter testing software uses a dynamic fixation marker that changes location from trial to trial, and patients respond by moving their heads or a hand-held pointer in the direction of the seen targets.

The VVP platform has been demonstrated to provide reproducible VF sensitivity measurements for glaucoma patients and suspects ([Figure 6]). Data suggest that VVP repeatability is consistent with SAP. Based on data from 24 eyes, the average difference of VVP mean sensitivity between the 2 sessions was 0.48 dB.[4] Additionally, research has supported the visual sensitivity obtained with VVP being statistically consistent with that of the structural measurements of both retinal nerve fiber layer and ganglion cell complex thickness obtained via spectral domain optical coherence tomography (SD-OCT), thus equivocating the structure-function relationship demonstrated by SAP and OCT.[5]

The VisuALL Field Analyzer (Olleyes Inc.) VR VF perimeter ([Figure 7]) is designed for standardized and mobile assessment of VF. According to Olleyes, this ergonomic, lightweight (0.3 kg) device performs full-threshold perimetry in as fast as 4 minutes per eye and screenings in 90 seconds per eye.[6] The platform comes in 2 versions based on office or home use. Both versions consist of the head-mounted device, a tablet, a Bluetooth-enabled response button, and cloud-based report storage. The perimetry test battery consists of all common protocols (24-2, 10-2, 30-2), and the 24-2 protocol implements a proprietary testing strategy called the Philadelphia Adaptive Threshold Algorithm. The platform incorporates 2 tracking systems that allow for superior tracking accuracy. The instrument first checks gaze position followed by presenting a stimulus. If fixation is less than 15° off center, the test will briefly pause while the stimulus location is adjusted. Consequently, a signal requesting fixation on the central target will be shown to the patient.[7] 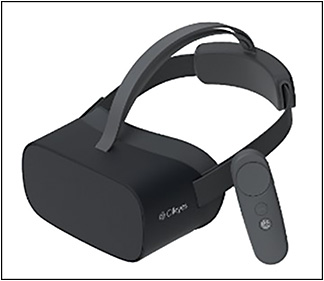 Alfaleus partnered with medical device developer Remidio to develop the world’s first clinically validated portable VF perimeter, the C3 Field Analyzer (C3FA; [Figure 8]).[10],[11] The C3FA is compact (0.6 kg), and as with the other devices discussed above, there is no need to occlude the patient wearing the C3FA headset; a Bluetooth response clicker is used, a tablet is utilized for test administration, and reports are saved via cloud-based storage. White-on-white perimetry is used with a Goldman III sized stimulus. Fixation monitoring is done via the Heijl-krakau method, and the testing battery consists of 10-2 and 24-2 fast and suprathreshold strategies.[11] 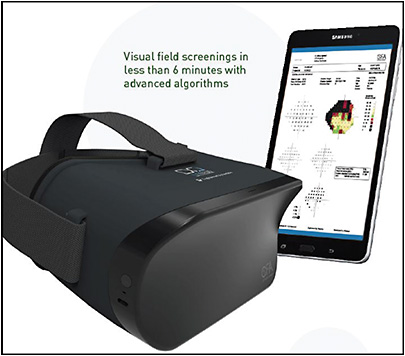 The device has support from research, with multiple studies conducted comparing it to the HFA. In one such pilot study, the C3FA presented stimuli in the same 54 positions as the HFA 24-2 SITA standard test using a suprathreshold algorithm approximating an 18-dB deficit, on a total of 157 patients with and without glaucoma. It was reported that the number of stimuli missed on the CFA correlated with HFA mean deviation (r=.62, P<.001) and with pattern standard deviation (r=.36, P<.001). Regarding sensitivity and specificity for clinically defined glaucoma, area under the ROC curve was 0.77±0.06 for mild glaucoma (HFA mean deviation ≥-6 dB) and 0.86±0.04 for moderate-advanced glaucoma (HFA mean deviation <-6 dB), with a positive predictive value of 0.76 for identifying glaucoma.[12] The strong area under ROC curve and positive predictive value are evidence of its ability to effectively identify glaucoma subjects. In a cross-sectional observational study comparing accuracy of diagnosis and severity of disease in patients with glaucoma undergoing VF testing with the C3FA and HFA, the C3FA demonstrated 86.11% sensitivity and 80.26% specificity in classification of early (mean deviation <6 dB) vs moderate (mean deviation between 6 dB and 12 dB) and advanced (mean deviation >12 dB) glaucoma, and 89.74% sensitivity and 88.00% specificity in classification of early and moderate vs advanced glaucoma.[13]

Virtual-reality perimetry appears to be the future of VF testing. The VR headsets allow for increased clinical efficiency and patient comfort, and they offer an additional avenue to detect glaucomatous progression earlier in the disease process. These devices could be combined with home-based tonometry for patients with high IOP fluctuation with questionable progression.[7] The cloud-based storage of these devices combined with their portability gives physicians the ability to deliver care to their glaucoma patients regardless of location. Each device discussed above shows significant promise in bringing better access to care for glaucoma patients around the world. In the authors’ professional experience, having 2 of these devices in the office has eliminated wait times for VF testing, and the patient acceptance and feedback have been overwhelmingly positive. With other VR devices and virtual VF platforms on the horizon, the current outlook of glaucoma care is bright and exciting. GP

Bradley A. Daniel, OD, FAAO, is a residency-trained ocular disease and refractive surgery specialist with Oklahoma Eye Surgeons in Oklahoma City, Oklahoma. He reports no relevant disclosures. Reach him at [drdaniel@okeyesurgeons.com].